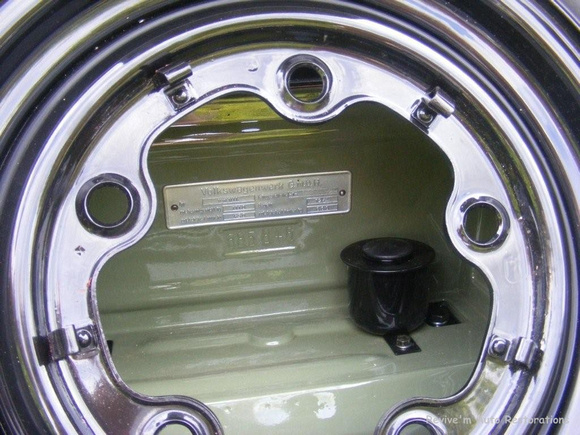 This car was imported to New Zealand from the UK in the late ‘60s. It is German assembled. Most New Zealand cars from 1955 on were assembled locally or in Australia – The glass markings are usually the easiest way to identify country of assembly.

The three fold sunroof is original to the car and is the same roof as used in split back window beetles, changing to the later two fold in 1955. Being Factory right hand drive this combination is extremely rare and would be difficult to replace, the bulk of sunroof beetles sold were left hand drive. This rarity justified the extensive restoration required.

Having started life in the UK the car had serious rust problems. There was also severe damage to the front from an accident which had bent the front beam. All panel repairs to our usual standard and chassis checked on our Auto Robot chassis alignment & measuring gear.

In addition many original parts were missing including the motor. Where possible all items replaced are of the correct year or type in order to keep things as authentic as possible.

Every last nut & bolt was removed/detailed in the restoration & while not an absolutely detail perfect restoration a very good result and well worthy of awards received.

The car is painted in its original L213 Island green, solid colour with an “off the gun” finish as per original. All other components such as tank interior trim are matched to the original colours.

Significant changes were occurring in the beetle evolution at the time this beetle was built. Only a few months before the split back window disappeared but prior to 1955 many items were the same as split window beetles, making restoration to original very difficult. Here are a few items that changed in 1955: